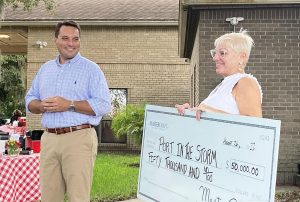 It was less than a week before Christmas when Judy Dembowski got the heartbreaker news that one of the homeless shelters she runs in St. Augustine was flooded.

“We were devastated,” Dembowski said. “For the kids, it was Dec. 20; the trees were up the stockings were hung. They had built gingerbread houses. And all the sudden we had to put them in a room the size of, not much bigger than this (pointing to her own modest office space).”

The clients, up to 16 at a time, were housed temporarily in the dining area of the St. Francis House, which is an adult homeless shelter in St. Augustine that Dembowski also manages.

The $180,000 in repair work was recently completed, allowing the facility near the St. Augustine Shipyard development to reopen.

The contractor on the job was MasterCraft Builder Group, which normally focuses on residential.

However, MasterCraft President Chris Shee said he and his staff really wanted this particular job because they all wanted to help.